When you really like beer, it is easy to be pleased. There is something for everyone’s taste: a wide range of percent proofs and of colours (pale, gold, amber, brown, or black). Whether it is during the summer on the outside sitting area of a café, or during the winter by the fireside, a good beer is rarely a disappointment. But the real question is: where can we find a good beer in Paris? Here is the answer with these eight craft beer pubs in Paris. 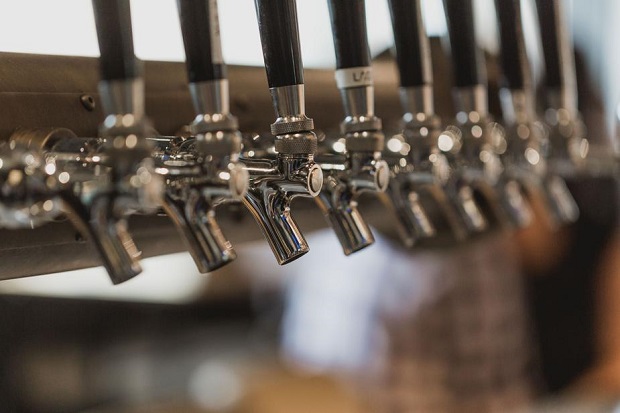 In this bar with a rock’n’roll atmosphere, you will find around a hundred different kinds of bottled craft beer, and eight different draught craft beers (alternating, mostly local productions), as well as organic wines and many other sorts of alcohol. So there is no doubt that you will find something to quench your thirst, and even something to eat thanks to their informal meals: cheese and cold meat plates or vegan spreads with pickles and a good traditional baguette from a Ménilmontant bakery.

What is better than drinking a good beer on the terrace of a pub? Drinking a good beer on the waterfront terrace of a pub! That is what this bar with an industrial but cosy atmosphere, recalling a loft in New York City, offers. Located on the edge of the bassin de la Villette, the Paname Brewing Company serves its own production that is brewed right inside the pub! A street food selection is also offered to fill your stomach.

The Brewpub Les Cuves de Fauve welcomes you with its industrial decoration made to look like a professional kitchen. Here, you will be able to enjoy six types of permanent craft beers as well as many transient ones. This is the perfect excuse to come back! Le Fauve’s beers have won several awards in France and abroad. In addition to its friendly atmosphere, the bar also regularly organizes different types of events.

Germany has been living an everlasting love story with beer, and it has been perpetuated in Montmartre! In this German pub, you will be able (as well as drinking good craft an industrial beers) to eat typical German food (Schnitzel, Spätzle, Apfelstrudel, Brezel, Weisswurst, and so on) in the backyard.

The name of this pub is a wink to a particular article of the French constitution that has been disputed in 2015, but is also (and mostly) a reference to the 49 kinds of beer they serve, and the 3 different brands per alcohol available in this pub. The snacks are not outdone since you can ask for generous cold meat and cheese plates for only €7.90 (€13.90 for a mix plate). Moreover, bread and cheese are offered with the first round. Prices are as good as the beer selection.

This entirely Parisian microbrewery was created in 2012 thanks to a crowdfunding campaign and now refunds the donators with beers! Each beer of this brewery has an emblematic name of the district: Ernestine, Myrha, Château-Rouge, La Chapelle, and so on. It originally was only a brewery, but a “tap room” has been open to enjoy a beer and tapas, and you can also taste the production if you visit the brewery.

4 rue Jean Aicard, 11th district
Open all week, from 5pm from monday to friday and from 4pm on the weekend.
www.lafinemousse.fr

La Fine Mousse is a craft beer pub selling French and international beers, essentially from the north of Europe (Belgian, English, and Norwegian beers). You will easily find something to please your throat, since there are around a hundred kinds of bottled beers and twenty draught beers (alternating). There is also a small restaurant whose waiters and waitresses will help you find the best meal/beer harmony.
Initiation and improvement workshops about beer are organised on a regular basis – check the official webpage for more information.

If you want to taste a beer as crafty as possible, why not try brewing your own beer? There are several workshops in Paris; each of them lasts about 4 hours, costs around €160 for one person or two people, and you will leave with 15 to 20 liters of your very own production. Here are a few names: Brew unique, Les Houblonneurs, La Beer Fabrique, Ma bière (webpages in French).

For the ultimate fans, there actually is a beer fair in Paris: it is called Planète Bière (website in French) (literally “beer planet”) and takes place every year around March and April and lasts two days (check the exact dates on the official website). [Guide] Wine Tasting in Paris : Where To Go ? How To Choose ? 18 Vegan Restaurants in Paris Every Vegan Needs To Know